Madagascar holds 9% of Africa’s mangrove forests and 2% of the global mangrove habitat. Since the 1950’s Madagascar has lost more than 40% of its original mangrove cover. Madagascar is one of the poorest countries in the world and its people rely heavily on mangrove forests and other marine habitats for survival. Approximately 87% of the adult population is employed by small scale fisheries. The income generated from small scale fishing activities represents, on average, 82% of household incomes. Fish is the sole protein source of 99% of households in Madagascar rural communities. Most of the fishing activities takes place along coral reefs and mangrove forests and seagrass meadows. 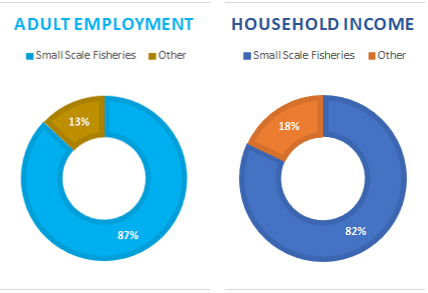 Healthy Mangrove forests in Madagascar act as nurseries for 18% of coral reef fish species, of which the majority are of commercial and economic importance. Degradation and deforestation of mangrove forests are threatening the survival of many rural communities as this goes hand in hand with a decrease in fish catch and coastal erosion.

The main threats to mangrove forests in Madagascar are agriculture, logging, aquaculture and urban development. Many mangrove forests are cleared to make way for rice fields, shrimp farms or for the collection of firewood. Mangrove wood is also used as building material for fish traps, fences, boats and homes, and the production of charcoal. The bark contains a high level of tannins that are used to dye leather. Mangroves have various additional uses such as medicinal properties and natural habitat for endemic species.

Mangrove forests can sequester large amounts of CO2 annually, up to 4 times more than tropical rainforests per area. Some forests are more efficient than others in carbon sequestration and their rates can vary considerably. On average, one hectare of mangrove forest can sequester 10 tons of CO2 annually. Mangroves are so efficient at carbon sequestration because they have an innate ability to store large amounts of carbon in the sediment. Their intricate root systems can hold sediment in place and its periodic or permanent flooding further holds carbon locked in the ground and keeps it out of the atmosphere.

Together with Eden Reforestation, local communities, and other partners we restore degraded mangrove forests and reforest previously destroyed mangrove lands. Community involvement is an absolute must. Training is provided for local communities to help them sustainably use natural resources provided by mangroves and how to build sustainable incomes through a variety of activities such as fishing, beekeeping and farming. Protection and maintenance of these young forests is provided by locals who understand and value the ecosystem.

This nature based solution to climate change comes with a range of benefits for the planet. Each hectare planted captures 10 tons of CO2 annually. Each hectare can provide up to 1.8 tons of fish and shellfish for small scale local fisheries. The mangroves provide protection from storms and erosion of shorelines and river banks. Agricultural fields close to shore are protected from salinization. With more stable incomes local families can send their children to school, pay off debts and avoid human trafficking into the slave or sex trade. Nature also benefits from healthy mangrove forests as they act as nurseries for many species of fish, sharks and turtles. In Madagascar the endangered hawksbill turtle makes use of mangrove forests as nesting grounds.

We are not only in this to fight carbon emissions. People, and especially rural communities, depend on nature to thrive. Together we are making the world a better place one mangrove forest at a time.